The goal of the Pi/Node-Red car project was to create a small vehicle that can be controlled from a smart phone . For the project we used:

The Arduino car chassis may require a small amount of assembly. Rather than soldering connections we like to use short alligator clips. It is not recommended to wire DC motors directly to a Raspberry Pi so the Pimoroni Explorer HAT Pro is used to connect the 2 DC motors.

The Raspberry Pi and the portable microUSB charger are secured to the top of the car chassis with duct tape. The left motor is wired to the motor 1 connectors on the Explorer Hat, and the right motor is wired to motor 2 connectors. Note you may have to do a little trial and error on the Explorer HAT “+” and “-” motor connections to get both wheels spinning in a forward direction.

The Explorer HAT Node-Red library is installed by:

The Web dashboard presentation is configured in the “dashboard” tab. For this example we create 2 groups: a control group to drive the vehicle, and a light group to turn on the Explorer Pro lights. Use the “+group” button to add a group, and the “edit” to change an existing group.

To control a motor, an “Explorer HAT” node and a dashboard button node are dropped and connected together. All the configuration is done in the button node . The button configure options are:

The Explorer HAT has 4 colored LEDs. To toggle the LEDS, the topic is light.color with 1=ON, and 0=OFF . We thought that it would be fun to also add some Web dashboard button to control the colored lights. 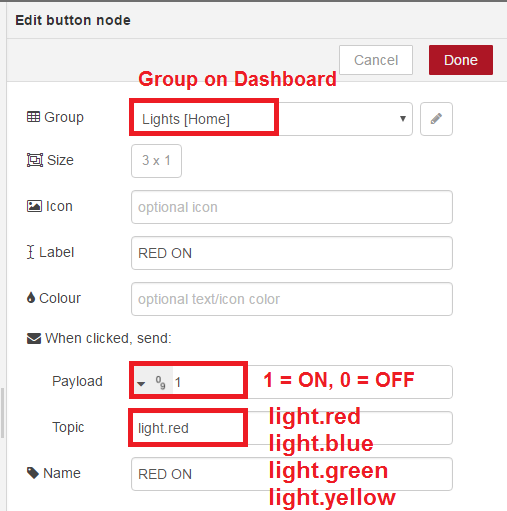 The Node-Red dashboard user interface is accessed by: ipaddress:1880/UI, so for example 192.168.1.102:1880/ui. Below is a picture that shows the final vehicle logic and the Web dashboard.