BBC Micro Bit, (micro:bit) is an open source hardware ARM-based embedded system designed by the BBC for use in computer education in the UK. The device is half the size of a credit card and has an ARM Cortex-M0 processor, accelerometer and magnetometer sensors, Bluetooth and USB connectivity, a display consisting of 25 LEDs, and two programmable button.

Depending on where you purchase it the price ranges between $15-$20. So this is a very attractive module for the beginning programmer.

The micro:bit module has 2 buttons to interface to it and a small 5×5 LED screen. This is good for small tests but its a little limiting if you want to see or do more complex tasks.

In this blog I wanted to discuss how to connect a micro:bit to a PC so that commands can be sent to the micro:bit and text responses can be viewed on the PC.

My first impression was that the micro:bit was super easy to hook up and get started on. All you need is a Web browser (https://makecode.microbit.org/) and a USB cable to get started on some programming.

Some of my other comments are:

My goal was to create a menu example where I could read/control logic from a PC to a micro:bit. For my testing I used:

The micro:bit block logic is added by selecting an item from the left code block palette. To start catching serial communications a “Serial on data received” block is used.

After this block is added other blocks are inserted into it. For this example I’m saving the “Serial read line” data into a variable called cmd. Because a new line character is sent from the PC after the command, a substring block is used to caption only the first character sent. (So cmd = “T” and not “T\n” for a temperature request).

The next step is to use an if block to determine which command is sent and do the requested action. The serial write line block is used to send back text to the PC.

The full logic for this example is shown below:

This same logic could be done in JavaScript. 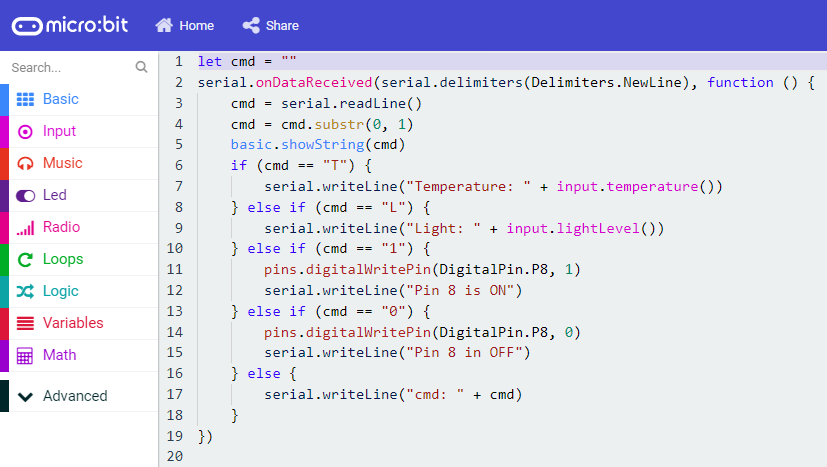 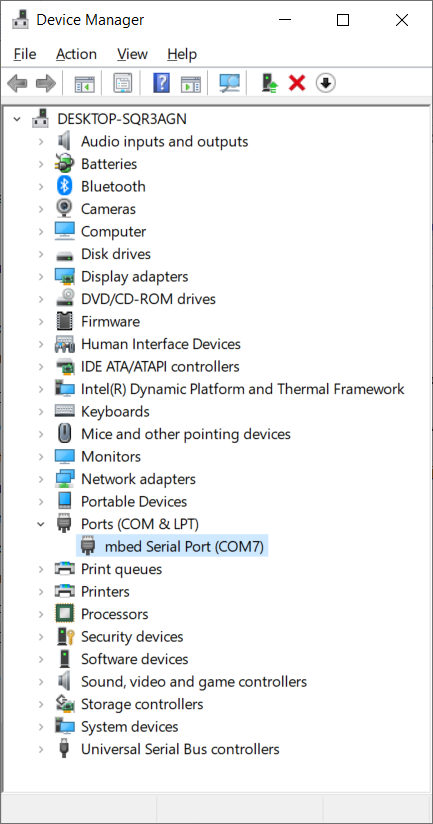 For the Python interface I used the Tkinter graphic library and I used 4 buttons to send commands and a label to show the feedback.

Some important points in the Python program:

For this example I used a simple Python menu to send some commands down to the micro:bit and get a response back. Other projects could include: