STOMP uses a send and subscribe mechanism to pass messages and like other messaging systems, the STOMP server is called a broker. Open Source STOMP brokers are available with ActiveMQ and RabbitMQ.

In this blog I wanted to document my setup that used the STOMP plug-in to RabbitMQ and show examples of getting Python and Node-Red subscribing and sending data.

MQTT and AMQP are very commonly used messaging protocol, so why use STOMP?

AMQP has a lot of great features but for many simple IoT (Internet of Things) applications AMQP may be overkill. Also AMQP is not supported with any mainstream Arduino libraries whereas Arduino Libraries exist for STOMP.

Both STOMP and MQTT are really light-weight, however STOMP has the advantage of being able to add headers and properties along with the message (a feature missing in MQTT but available in AMQP). So you could send a STOMP sensor message and include things like: quality, status, area, and comments along with the value.

STOMP messages can also be used on client side JavaScript web pages. This isn’t supported on AMQP but it possible using Websockets with MQTT.

RabbitMQ can be installed on Window, Linux, MacOS systems and there are also some cloud based offerings. For small systems lower end hardware like a Raspberry Pi can be used.  For complete RabbitMQ installation instructions see: https://www.rabbitmq.com/download.html . To install and run RabbitMQ on a Ubuntu system enter:

The next step is to add some plug-ins. For this project I loaded the STOMP plug-in and the Web Administration plug-in:

The rabbitmqctl command line tool allows you to configure and review the RabbitMQ server. To add a user admin1,  with password admin1, that has config, write and read rights for management and administrator access, enter:

At this point a super-user (admin1) has been defined and that user has been given rights to talk to all features of RabbitMQ including STOMP. See the STOMP documentation for STOMP specific user and system configuration.

After you’ve defined an administrative user the RabbitMQ web management plug-in can be accessed by: http://ip_address:15672 . The Overview tab should show STOMP running on the default port of 61613. 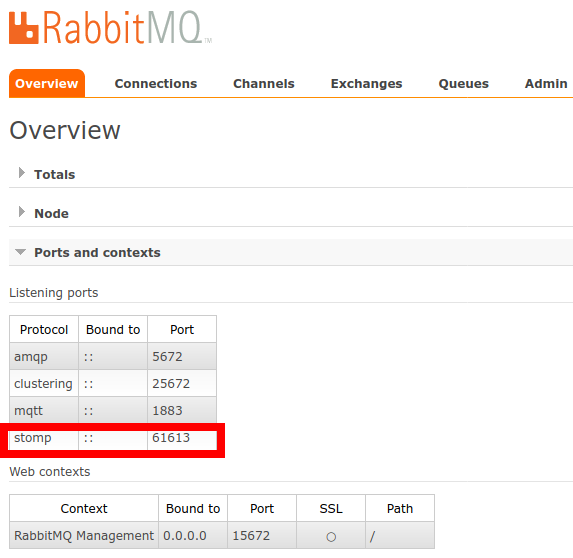 For clarity it is good to define a RabbitMQ exchange that is to be used for STOMP. There are a lot of options but the easiest thing is to make a DIRECT exchange that is DURABLE (available after a restart).

Once loaded stomp.py can be used to connect to a server and test subscribing and send data. Below is an example connecting to host 192.168.0.105 with user: pete and password pete.

For this example the exchange stomp1 was defined. The topic tag1 was dynamically defined and a message was sent and subscribe to. The topic (tag1) doesn’t need to be defined in RabbitMQ.

A Python STOMP test program would be:

The Node-Red STOMP node can be installed using the menu option “Manage Palette”  or manually:

A simple Node-Red test circuit would include:

Node-Red can be used to configure Web dashboards that can show trending and charting of STOMP values.

Once I had both Python and Node-Red working with STOMP I was able to go back to my RabbitMQ and view the connections.

It is also possible to use RabbitMQ to publish STOMP messages. In this example I included in the header: status, quality and units. 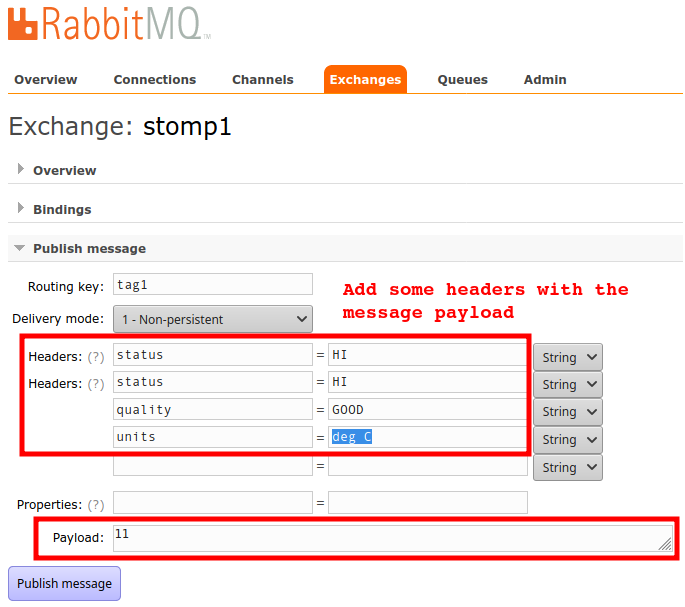 I then was able to check the message in Node-Red.

Compared to AMQP and MQTT there aren’t nearly as many examples so I needed to do a little bit of experimentation. As an example I found that if I send and subscribe to a queue (use: /queue/my_queue)  this was only a 1-to-1 connection, if I had 2 subscribers each subscriber would only get 1/2 the messages. So I’m recommend using RabbitMQ exchanges for STOMP messaging.

This was a quick introduction to STOMP with Node-Red and Python. I still need to look at Arduino and Javascript connections.