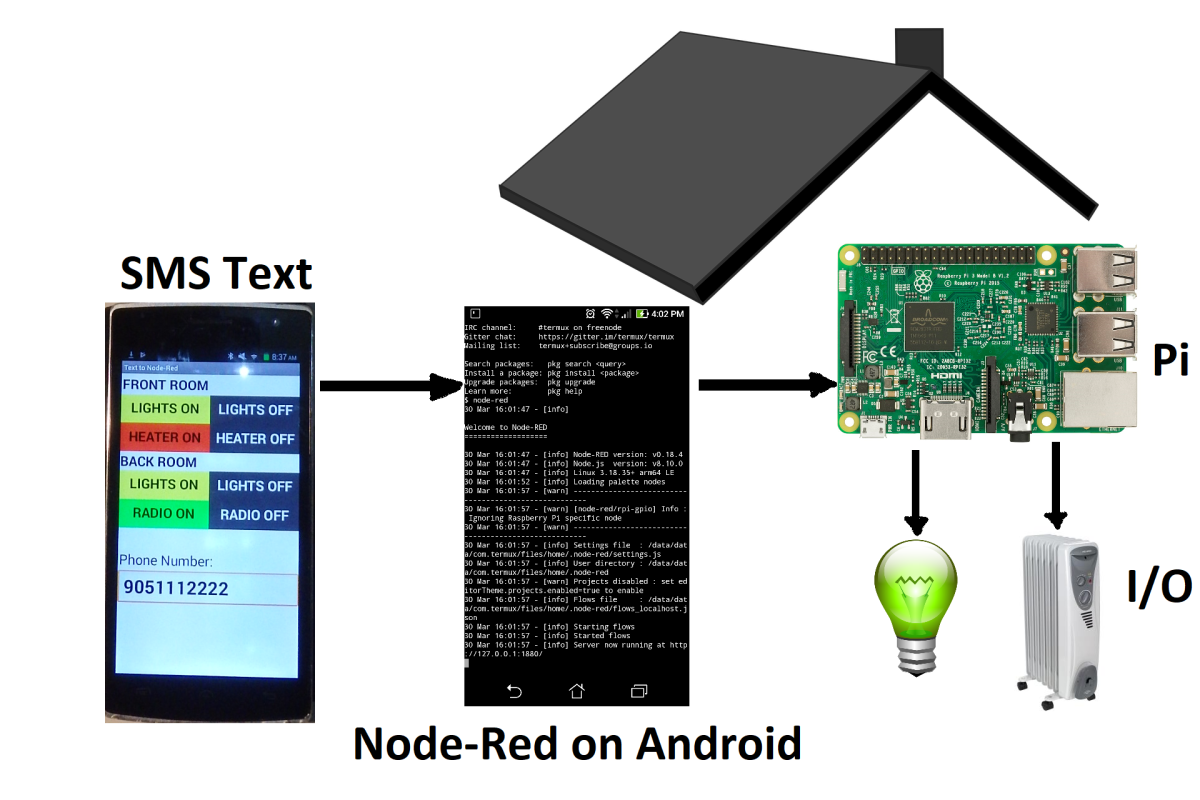 In places where Internet connections are not possible or too expensive,  SMS text messaging can be a simple approach for monitoring and controlling your remote systems. Many of the mobile providers offer IoT packages for low data throughput, where you’d be looking at spending $1 to $5  per month for 1-5 MB of data.  From the hardware standpoint there are many options such digital modem modules that come in either a Raspberry Pi top or a USB form factor.

If you are looking at doing some prototyping, using an Arduino phone and Node-Red is a great way to get jump started.

Node-Red is a graphical programming system that is used for Internet of Things (IoT) projects. Node-Red is installed in the base Raspberry Pi images, but it can also be loaded on Linux, Windows, MacOS and Android systems.

To load Node-Red on Arduino, you will first need to load Termux,  an Android Terminal Emulator app, that is available at Google Play. After Termux is loaded, enter the following commands to install  and run Node-Red:

Node-Red will start a Web graphical interface that is accessed by:  http://the_ip_address:1880. Extra features can be added and removed from Node-Red by selecting the “Manage Palette” menu option. For this project I needed terminux-api for the texting support, and bigtimer to scanning the text message buffer.

For a basic setup I used:

To create a simple text message application on the Android Note-Red system, the following components are used:

A basic logic setup will be as follows:

The function node needs some logic to interpret the latest text message and send out the required logic to the Raspberry Pi GPIO pins. The example logic uses a text message of  “LIGHTS ON” or “LIGHTS OFF” to control the output on GPIO pin 12.

The first time that the code runs you will be prompted on the phone to “Allow Termux:API to send and view SMS messages?”. After you acknowledge this message your Node-Red logic will run cleanly.

Android phones can not be directly connected I/O devices, so TCP connections can used to pass commands to Raspberry Pi’s which have the I/O support. Node-Red is pre-installed on most Raspberry Pi images so no added installation is required.

On the Raspberry Pi Node-Red side only a couple of nodes are required:

Texting Out from Android

If your text scheme is simple, for example one light that is turned on and off, then you could manually just output an “ON” or “OFF” message. However if you are controlling multiple lights, heaters and other devices then manually typing the text messages gets awkward.

To manage multiple commands, I wrote a simple Android app in MIT’s App Inventor. App Inventor is a free online Android development environment, that only requires a Google login for access. In about 10 minutes I was able to get a prototype going with multiple inputs. The first step is to drag and drop some buttons from the User Interface Palette onto the viewer pane. Then drag and drop a Texting component from the Social Palette onto the view. Note, the Texting component will appear as a non-visible item.

After you have a basic layout, select the Blocks button on the menu bar, and this will open a logic page. Logic is created by clicking on the objects in the Block panel, and then dragging and dropping the block onto the Viewer panel.

To have a button sent a text message the following pieces are required:

To build the application use the Build menu item on the menu bar.

For my test project I configured four devices and eight commands.

I found that using Node-Red on Android to be a lot faster than I expected, however I noticed that some of the added features (like Bluetooth support) only worked on the Raspberry Pi/Linux version of the Node-Red.

For a final solution I would definitely move to dedicated SMS hardware, but I found it nice to be able to do proof of concept testing with just some basic Android phones. Also don’t forget to setup Node-Red for automatic startup on a power up.