There are a number of different approaches for putting Android on a PC. The first approach is with emulators or virtual systems that run under Microsoft Window. The second approach is to have a bootable Android operating system that runs directly on the PC hardware.

The emulator approach is great for testing Android code or running Android gaming on Windows.

This blog will look at loading Android on older PCs where Windows is too slow.

Versions of Android for PCs

There a number of popular Android versions that can be loaded on older PC:

I was unable to download a OS for Bliss (no links were available).

Phoenix and OpenThos were challenging to use because they were written for Chinese users. I found you could enable English but it was awkward and the translation wasn’t 100% .

Android-X86 has been around for many years and it worked well for older PCs. I liked Android-X86 but found that the the user interface was crude compared to PrimeOS.

PrimeOS was definitely my preferred choice. (However I would have liked to have tried Bliss).

The instructions for installing PrimeOS was straightforward. You will need an image write to move the iso (or img) file to a bootable USB memory stick. A good image writer is unetbootin, (which works on Mac, Windows and Linus).

You can run a live boot from a memory stick or SD card, however your setting won’t be saved. I used a PrimeOS bootable USB stick to install PrimeOS on a second USB stick.

One of the great features of Android is that it has a very small foot print compared to Microsoft Windows. So you can leave Windows on the PC and then boot Android off of a memory stick (or SD card).

PrimeOS adds a desktop look and feel with a bottom menu. Running apps are shown in the menu.

The PrimeOS icon button will show apps that are installed.

I found that I was able to load a lot of the apps that I use on my Android tablet, but no all.

I was happy to see my Bruce Train hiking app was full screen, however the All Trails app came up with a smart phone sizing. 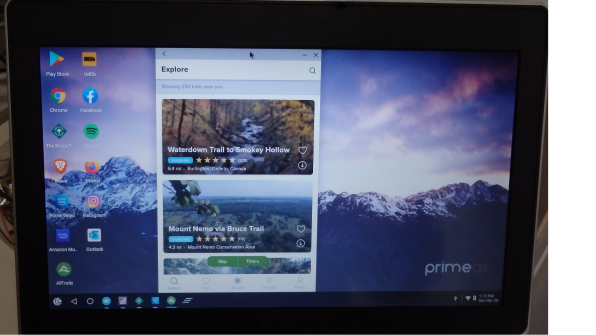 Be warning not all your apps will load. Some that I found were: Netflix and SiriusXM. However I had no problem installing Amazon Prime and Amazon Music.

I also found that some application were just difficult to use on PrimeOS, and this was especially true with Google Mail and Outlook Mail.

Good news is that the Firefox and Chrome browsers work well.

If you have an old PC that isn’t cutting it with Windows, put PrimeOS on a memory stick, and then give yourself a second option.

PrimeOS will allow you to use many of the Android apps that you feel comfortable with on your smart phone.

It’s important to note that PrimeOS does not have the performance or stability that Linux has. So if you’re not happy with PrimeOS on your old PC try one of the many Linux systems that are designed for older PCs (Puppy, Xubuntu, etc.)